Cognitive Behavioral Therapy for a child with ADHD (510)

Current ongoing farmers’ protests in Delhi and UP border is one of the major social issues of 2021, and it is getting support day by day. However, none of Hollywood celery took the initiative to take a stand for farmers before Rihanna’s tweet.

Indian farmers’ protest (2020-2021) is an ongoing protest against three farm acts, which the Parliament delivered to India in 2020 September. In case you are unaware of what is happening in the rally, and parliament statements, then take a look at this news and live updates. 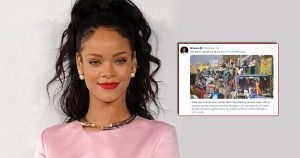 Rihanna shared news of CNN in her tweet, “India cuts internet around New Delhi as protesting farmers clash with police.” And she is her tweet “why aren’t we talking about this?! #FarmersProtest.”

Why is her tweet making a buzz around the internet?

After her tweet, many other Hollywood celebrities took a stand for farmers to protest, like teenage climate activist Greta Thunberg and the US vice president’s niece Meena Harris.

After covid 19, things have been the worst and least progressive in terms of the overall development. Despite that, farmer protest is the second most social severe event of 2020. As it is their rights and everyone has freedom of speech can make their point.

However, it is a battle between the nation’s livelihood and government. No doubt, in India agriculture sector adds 70% of livelihood, which means every commercial and personal sector related to agriculture.

Hence, it is one of the significant social issues these days on which people and government must do something.